MP2 (sometimes also called Musicam) is short for MPEG-1 Audio Layer II. MP2 files usually have an extension of .mp2 but sometimes .mpa is used instead. MP2 has largely been superseded by MP3 (MPEG-1 Audio Layer III) for file sharing and CD ripping, but it remains a dominant standard for audio broadcasting in Europe as part of the DAB digital radio and DVB digital television standards.

MP3 should provide superior sound quality to MP2 at the same bitrate so there is no reason to use it for CD ripping or encoding from analogue sources. However since MP2 is the audio format used in DAB and DVB all over the world, the best way to record from these is to use some method to capture the MP2 audio stream straight to disk (e.g. using PCI DVB card). An MP2 created like this will provide a perfect copy of the original broadcast.

The MPEG-1 specifications say that a MP3 decoder must be able to decode Layer I & II too, so any MP3 player should play MP2 files. MP2 support is probably even wider then MP3 support since it is the audio format used in .mpg files too.

In theory all hardware MP3 players should be able to play MP2, but in practice this does not always seem to be the case. Some have no problems playing MP2 files (even if this isn't mentioned anywhere in the players specifications), some will only play them if you give it an .mp3 extension, and others won't play them at all.

If your hardware player only plays MP2 files with an .mp3 extension it might be worth asking the manufacturer if this could be fixed with a firmware update. Try to remember to rename it back to .mp2 before sharing it again, as there are some technical differences between MP2 and MP3 that mean things like Replaygain only work with real MP3 files. Using a double extension like (e.g. radio_mix.mp2.mp3) might help you remember.

Remember that converting from MP2 to MP3 (or any other lossy format) will always result in a (small) loss of quality, so it's best to only convert when you have a really good reason to do so.

How Do I Configure ALL2LAME and LAME?

As long as lame.exe is in the same folder, that’s it! You don’t need to configure ALL2LAME any more than that. Easy!

How Does It Work? 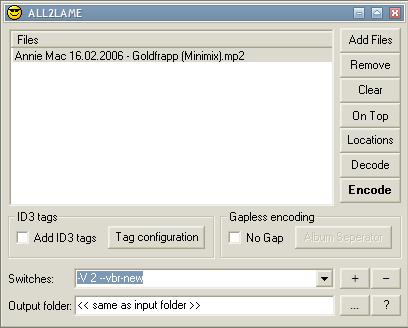 Both MP3 and MP2 files can be losslessly cut and trimmed using: